An optical encoder is an electromechanical device that uses a light source, light detectors, and an optical grating to convert rotary or linear position to an electrical signal. Optical encoders can be incremental or absolute but the focus here is incremental. There are three primary implementations: transmissive, reflective and interferential. This paper discusses the technology and relative merits of each implementation.

Defines the smallest position increment that can be moved or measured and is typically expressed in “counts”. High resolution is required for high performance servo systems. A positioning system “dithers” between two counts so the higher the resolution, the smaller the dither. Resolution also has a significant impact on velocity ripple at low speed. Since velocity is derived from position feedback, if the resolution is low there may be insufficient data in a sample to accurately derive velocity. At high speeds, high resolution devices can generate data rates beyond the tracking capability of the controller or servo drive.

Optical encoders generate sine and cosine signals. The period of these signals is defined by the inherent “pitch” of the device. With sin/cos information, it is theoretically possible to have infinite resolution by computing the ratio of the signals. This technique is known as interpolation. In practice, the fidelity of the sin/cos signals and signal to noise ratio limit the realizable resolution.

Defines how close each measured position is to the actual physical position. Accuracy is very much a system issue, and can be dominated by mechanical errors such as eccentricity, straightness and flatness. Sensor errors include non-accumulating random variations in pitch (linearity), accumulating pitch errors (slope), and variations in fidelity of internal sin/cos signals. Precision machine builders typically calibrate out errors via a lookup table of offsets. More detail can be found in our Technical Paper ‘Understanding Resolution, Accuracy & Repeatability’.

Defines the range of measured positions when the system is returned to the same physical position multiple times. Repeatability can be more important than absolute accuracy. For system inaccuracies to be effectively calibrated, it is important for each position reading to be consistent. Sensor hysteresis (different readings depending on direction of approach to measure position) is an important factor in repeatability. 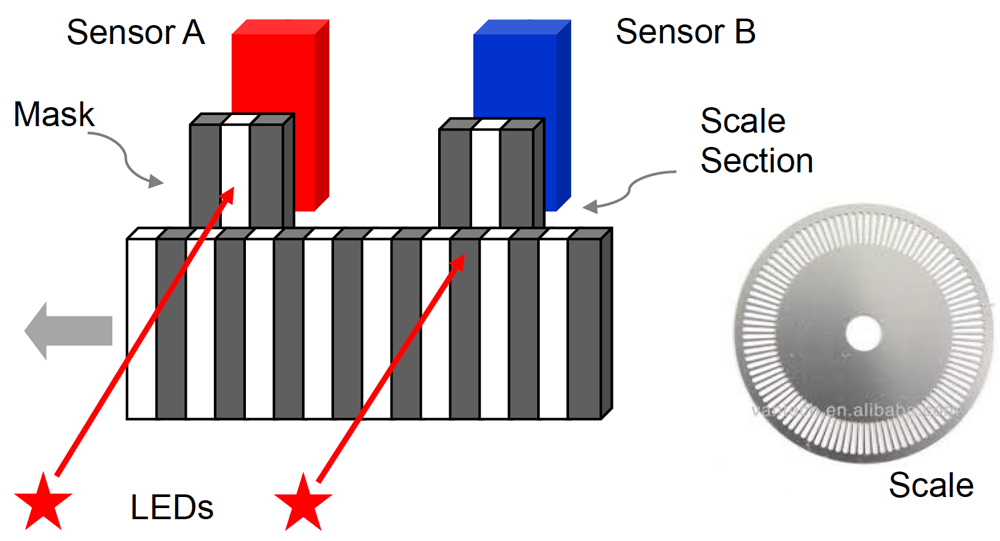 The transmissive encoder uses optical scanning of a fine grating or “scale”, illuminated by an LED light source. The scale, rotary or linear, is made of transparent and opaque “lines” that are arranged in a 5050 duty cycle. The number of transparent regions on the disc corresponds to the scale pitch which defines the resolution of the encoder.

The sensor generates a voltage in proportion to the incident light intensity. As the sensor moves relative to the scale, the voltage varies sinusoidally. A second light detector is added 90° out of phase. This relates to a displacement of half a scale line. Whether the signal from sensor A leads sensor B, or vice versa, defines the direction of relative motion. The encoder output can be sin/cos signals, but the signals are more typically converted to square waves: A quad B (quad relates to 90° phase shift). A controller detects transitions on the edge of each square wave, which effectively increases the encoder resolution by a factor of 4.

The detectors tend to be large compared to the width of each line. At higher resolutions this can lead to spillover between channels. Adding a mask that matches the pattern of the channels helps clean the signal. The trade-off with this type of design is that the air gap between scale and sensor must be very small, imposing strict specifications on disc parameters such as flatness, eccentricity, and alignment, making the device more vulnerable to shock and vibration.

Phased-array incremental encoders use solid state technology to provide a more robust solution. Instead of a discrete detector for each channel, a phased-array encoder features an array of detectors so that each channel is covered by multiple detectors. This approach averages the optical signal, minimizing variations introduced by manufacturing errors, such as disc eccentricity and misalignment, and improves performance while relaxing fabrication tolerances.

Inherently incremental, the encoder typically has an additional scale track with a single transparent line and separate sensor. The sensor generates an index signal defining the null position of the device.

A transmissive encoder is typically packaged in an enclosure with internal bearings and a shaft for connection to a motor via a flexible coupling. The enclosures are available with a range of sealing ratings and are bulky. 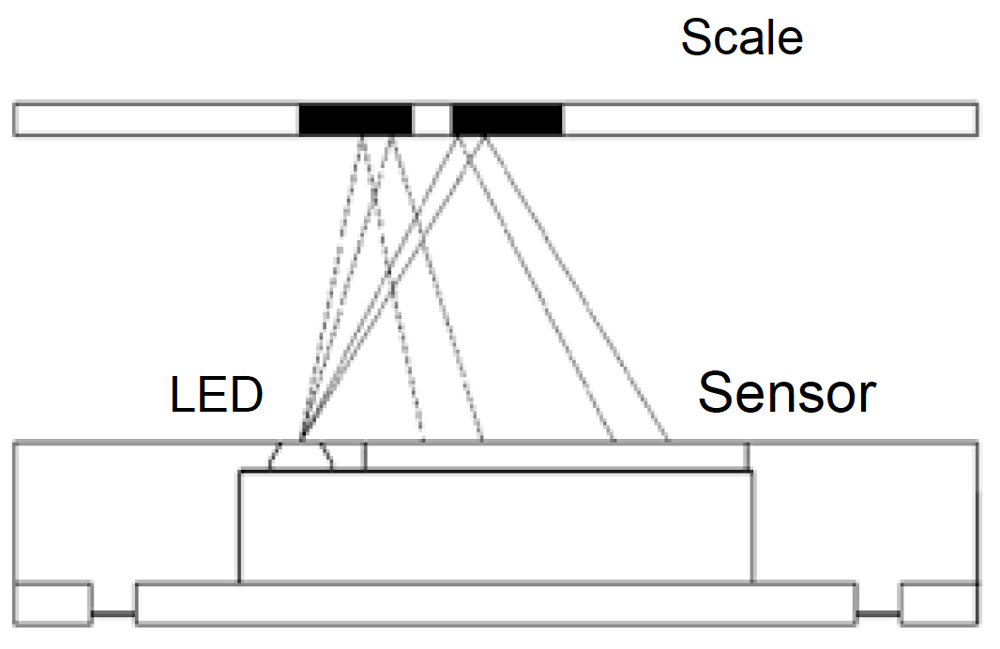 Reflective encoders are typically modular devices with no enclosure or bearings and must be built into the mechanical system. They are much more compact but may require a more benign environment.

An interferential optical encoder operates by a coherent laser light source generating a diverging beam, which illuminates a diffraction grating pattern printed on the scale.  The grating pattern is created using either chrome deposition on a glass scale, or laser written lines on a metal tape scale. The 20µm pitch grating diffracts the light to generate a high contrast interference pattern of bright and dark, directly back onto a detector array. Inherently incremental, a second index/marker track is typically used.

The diffracted light creates discrete Talbot planes of interference patterns. In the example from Figure 3 above, the 3rd Talbot plane is utilized. As the relative position of the scale and detector changes, the diffraction pattern translates across the detector array, resulting in a sinusoidal change in each detector cell.

Interferential technology requires minimal optical components, resulting in a sensor of small size. Resolution, without interpolation, is typically more than order of magnitude, higher than transmissive or reflective optical encoders. Because of the fidelity of the sine and cosines signals, high interpolation is possible, yielding nanometer resolution with high accuracy. Considering the precision of the device, alignment tolerances are not excessively demanding. 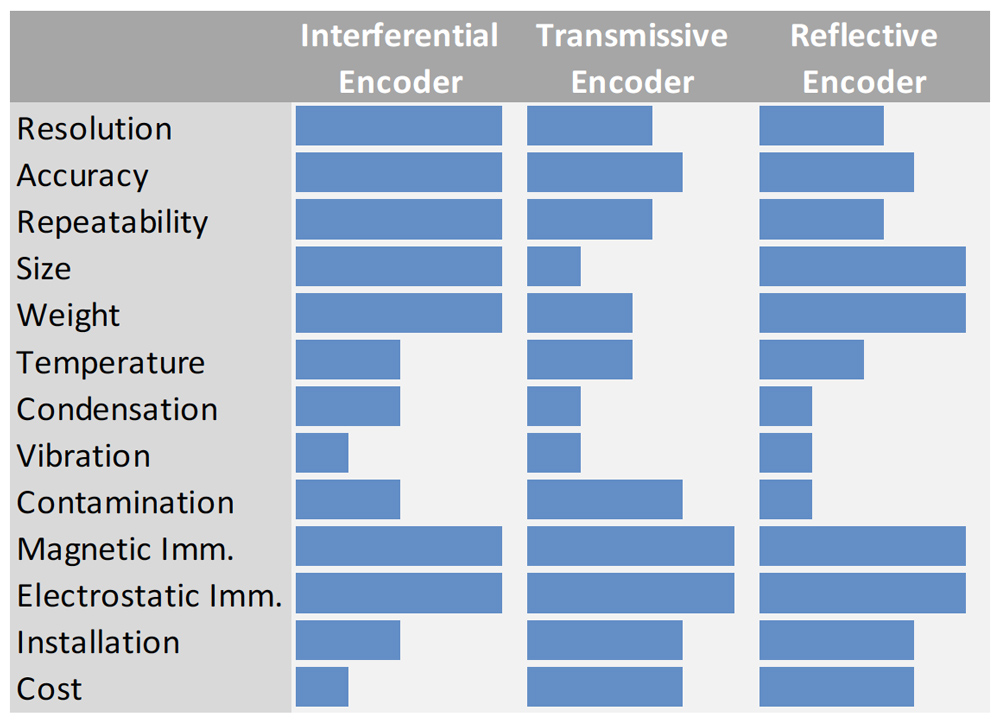