This paper explains why the current in the windings of a servo drive is different than the DC bus supply current. A power stage H-bridge, connected to a motor winding inductance, is modeled and analyzed during the PWM switching cycle. The balance of motor mechanical power and input electrical power is also discussed.

The current that flows through the phases of a motor is lower than the current flowing through the DC bus input because the servo drive behaves as a step-down DC/DC converter. Ignoring the

In order to understand why the current of the power supply is different than the motor phase current, first, it is necessary to understand how an H-bridge controlling a motor (an inductive load) works. As an example, we are going to use a DC brushed motor with a 2-quadrant switching scheme, as seen in Figure 1: 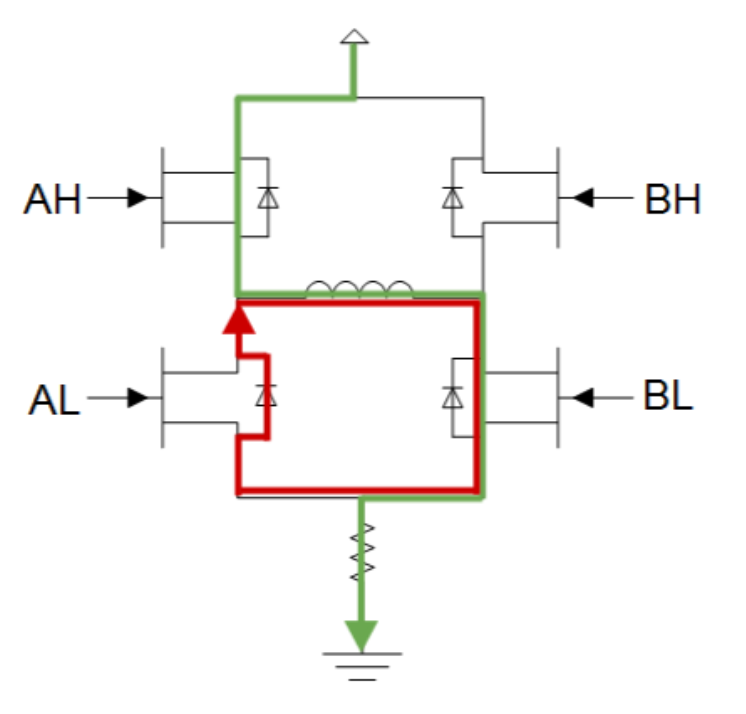 As seen, the model of the motor and its switching grid can be simplified to a DC/DC buck converter. It can be done, with small variations, in a 3-phase grid and with any switching scheme. 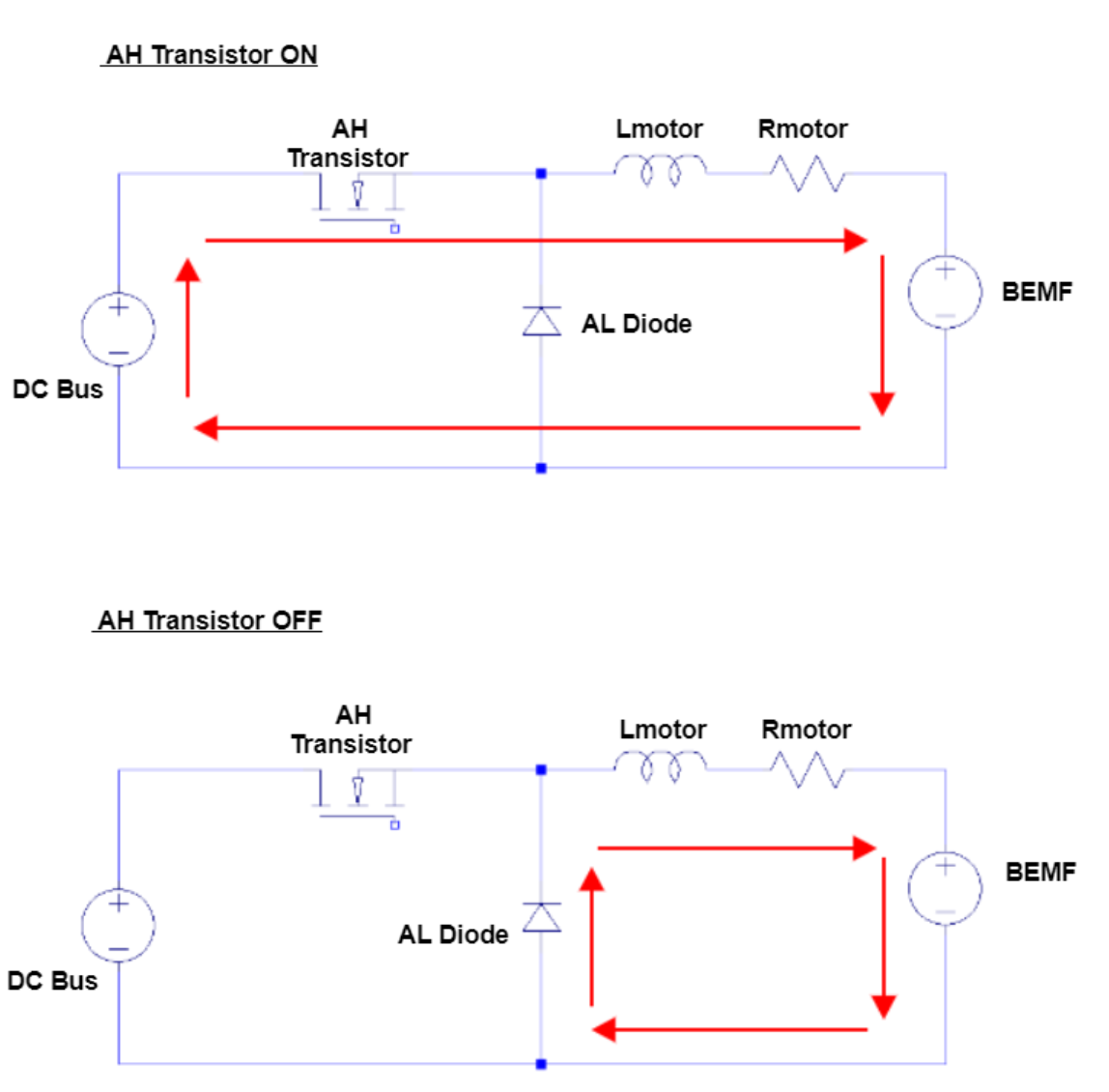 The waveform of the voltage and the current during a switching cycle, assuming steady state and continuous conduction mode (which is the normal operation), is shown in Figure 4. 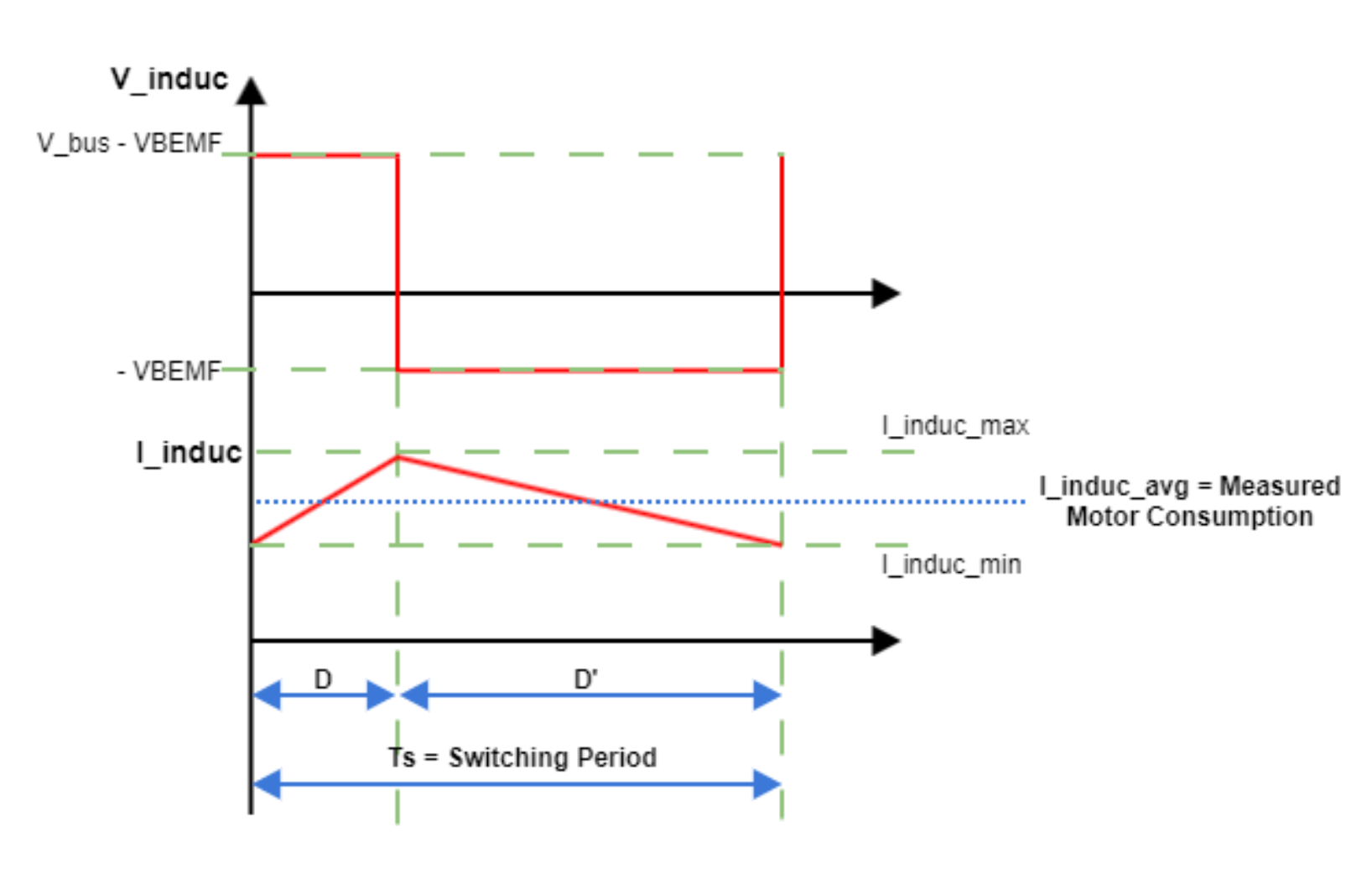 In the TON, the inductance is storing energy due to a positive voltage therefore its current rises. In the TOFF, the current falls due to a negative voltage (equal to – BEMF if we ignore the resistance of the motor) and as a result, the inductance loses energy (transferred to the motor and converted to movement, heating, etc). When measuring the current, the measured value will be the average value of this current ripple.

Now, let’s see why the input current (DC bus) can be different from the output current (motor phases).

As mentioned, the current always flows through the inductor, but only in TON  through the AH transistor. This means that the average current  is not equal, and the average value of those currents corresponds to the RMS or DC value. Figure 5 shows it graphically. 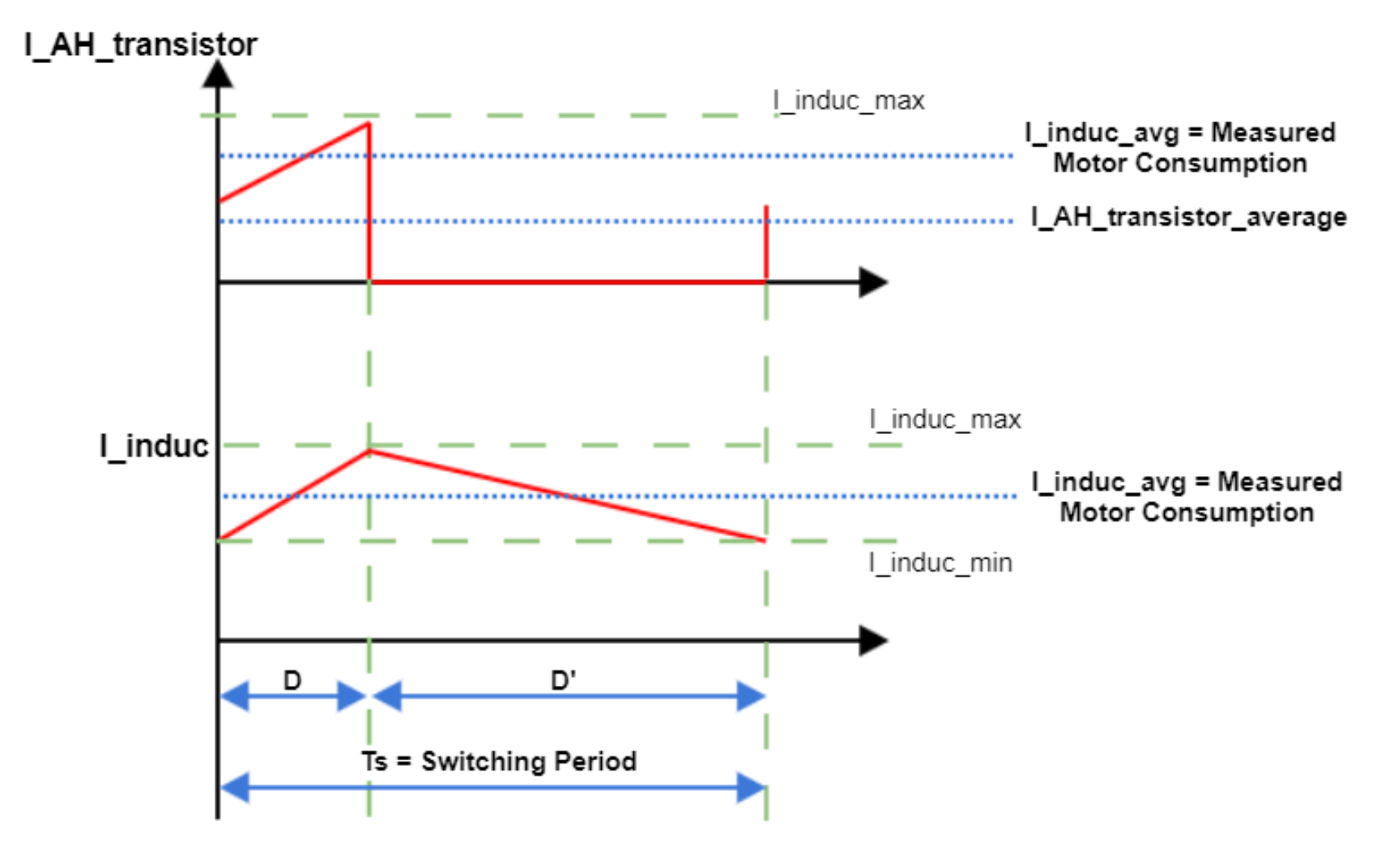 Another way to understand this conversion is seeing the switching grid and the inductor as a “black box”, which simply stores energy during TON and drops it during TOFF. Taking that into account, doing a power balance, it can be understood.

In Figure 6, the input voltage, the BEMF, and the output current are fixed values. As Pin=Pout must be equal (inductor cannot store energy forever and a steady state must be reached), the input current value will follow the next formula:

If the voltage of the BEMF is lower than the DC voltage, then the value of the DC current will be lower than the motor current, because the power balance must be maintained. If the motor speed is high, the back electromagnetic force voltage (BEMF) will increase. For a given current, the PWM duty cycle will be higher. This means the motor current can get very close to the power supply current at maximum motor speed (maximum PWM duty cycle).

This can be understood also from the power balance point of view. Motor mechanical power is speed * torque, while input power is voltage * current.

At low speeds net mechanical power is ~ 0, therefore most of the energy is essentially converted into losses. Only when the speed increases, net power increases.